Back To Z News 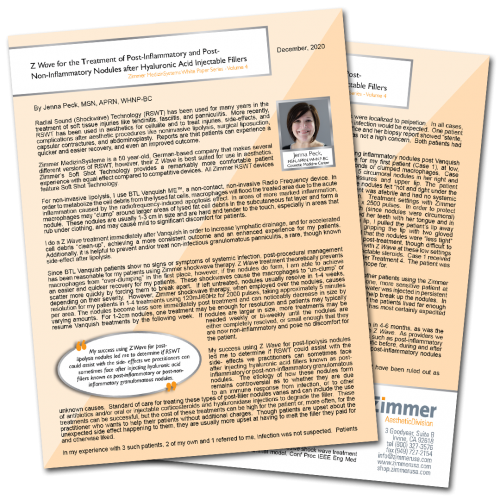 Scroll down below article or click to go directly to the complete 2-page paper.

Peck began by describing how her usage of the Zimmer Z Wave device evolved. She initiated her Z Wave in combination with BTL Vanquish ME™, a Radio Frequency device, to administer non-invasive lipolysis.  She noted, “I do a Z Wave treatment immediately after Vanquish in order to increase lymphatic drainage, and for accelerated cell debris ‘clean-up’, achieving a more consistent outcome and an enhanced experience for my patients. Additionally, it is helpful to prevent and/or treat non-infectious granulomatous panniculitis, a rare, though known side-effect after lipolysis.”

The report details Peck’s thought process in deciding to expand her usage of Z Wave to aid with other aesthetic procedures. “My success using Z Wave for post-lipolysis nodules,” she continued, “led me to determine if RSWT could assist with the side-effects we practitioners can sometimes face after injecting hyaluronic acid fillers known as post-inflammatory or post-non-inflammatory granulomatous nodules.”

Peck introduced a clinical case in which she began studying Z Wave treatment of nodules after HA injectable facial filler. After this first trial, she found that “immediately post-treatment, the patient reported that she could feel that the nodules were ‘less tight’ and were ‘less uncomfortable’.” Peck reviewed her Z Wave protocols and the treatment settings that were applied. She summarized, “Case 1 received 4 total treatments within 2 weeks, and her nodules were completely resolved after treatment 4. The patient was very happy, and as her provider, this was the best possible outcome one could hope for. After the success of Case 1, I have been able to achieve similar outcomes for other patients using the Zimmer Z Wave.”

She compared the results that she was able to obtain in two weeks with Z Wave to similar cases where non-infectious nodules were not treated with Z Wave. She noted that when left untreated, these non-infectious nodules normally resolve in four to six months. “Should an unforeseen complication with post-inflammatory nodules occur,” Peck concluded, “Z Wave has proved a safe and useful treatment option.”

You may read the complete article below.

Scroll down to read the complete 2-page paper, “Z Wave for the Treatment of Post-Inflammatory and Post-Non-Inflammatory Nodules after Hyaluronic Acid Injectable Fillers”, by Jenna Peck, MSN, APRN, WHNP-BC.

The Zimmer Z Wave transmits powerful sound waves into the tissue. The energy then spreads out radially to enhance the treatment effect (Radial Pulse Therapy). The body responds to these sound waves with increased metabolic activity in the form of lymphatic drainage and increased blood circulation. The result is an improvement in the appearance of cellulite and improved results when used with other body contouring procedures. For more information about the Z Wave, visit a web overview of the product. You may also contact Zimmer any time by phone or email.

Below is the complete report by Jenna Peck, MSN, APRN, WHNP-BC.

(Please be sure to use the arrows or scroll bars in the viewer below to see each of the pages!)